Our large Book Collection is a mix of reference books about the local area, its history and its people, and historic as well as important editions that form the collections proper. Reference works and primary sources include original trade directories and bound photocopies of a short run of Kelly’s directories, as well as books written by past and present members of the Museum and Wimbledon Society.

Old and important books from the mid-16th – 20th centuries include: John Evelyn’s Sylva (1694), Frederick Marryat’s The Universal Code of Signals for the Mercantile Marine of all Nations (1854), Joseph Toynbee’s Hints on the Formation of Local Museums (1863), and Sphairistike (1874) by Walter Wingfield, as well as personal, school, and family bibles. Books also interrelate with other items and archives in the Collections. Histories by Bartlett (1865) and others illustrated with local views are an invaluable record of old Wimbledon. A few have amusing additions, for example an Edwardian schoolboy’s history textbook with a doodle, a caricature perhaps of his teacher.  The earliest book is a compendium of extracts from the gospels by Thomas Paynell in 1553.

We have also begun to collect children’s books and have a charming and growing collection of books once owned by local youngsters in the Victorian period and early 20th century, as well as some modern ones by local authors. Many early children’s books are battered and worn, showing how much they were loved and read. Better preserved and more pristine are copies of edifying works to be read on Sunday afternoons.

The earliest book in our collection 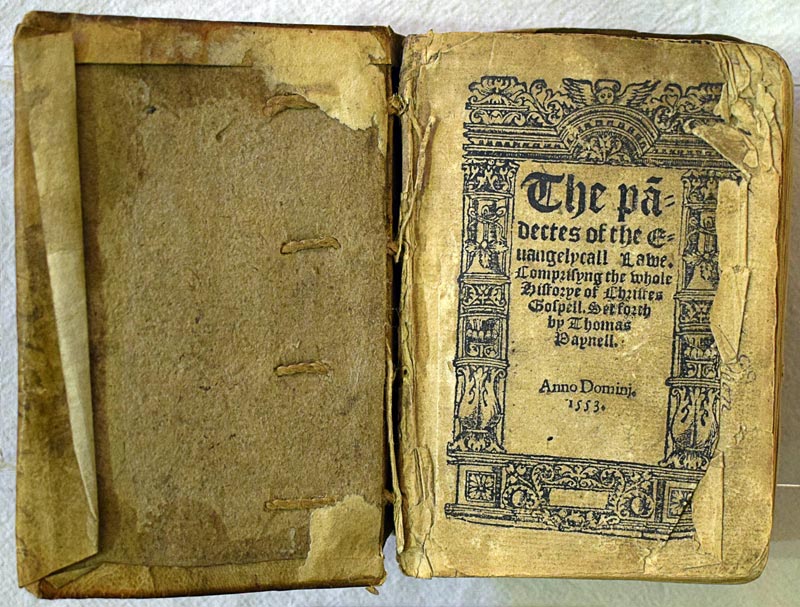 The earliest book in our Collections is a compendium of the Gospels printed and published in 1553 – The pa[n]dectes of the euangelycall lawe. Comprisyng the whole historye of Christes Gospell. Set forth by Thomas Paynell.

Understandably it is worn, a little battered and grubby, and clearly was much used in its earlier life. Pandectes is from the Greek πανδεκτης, a gathering together, ‘pandect’ in English, and means a compendium.

We don’t know who originally owned our copy in Tudor times, but we do know who compiled the texts, Thomas Paynell, who is thought to have died in 1564, and who, after studying at the University of Paris, was a canon at the Augustinian Priory at Merton.

When the Priory was closed down during the Dissolution of the Monasteries in 1538, Paynell received a pension of 10 shillings a year – difficult to translate into today’s money, but clearly a reasonable amount. The pension list for the Priory was signed off by Thomas Cromwell.  Paynell then became Rector of Cottingham in Yorkshire and later of All Hallows in London. He was chaplain to Henry VIII, and later orator (a speaker at public and ceremonial events) to Mary Tudor and Elizabeth I. He was sent on some diplomatic missions to Europe by Henry. This talent appears to have kept him in favour with Henry, Mary, Edward and Elizabeth, despite differences in their religious views. Paynell dedicated books to all of Henry’s children.

Thomas Paynell was an extremely learned man and a prolific translator of important works covering religious, literary, secular and medical topics such as works by Erasmus, medical texts on diet, the plague and syphilis, Catholic writings such as the sermons of St Augustine, medieval tales about the Siege of Troy and romances.  The list seems endless and his output amazing!

Paynell lived in changing and challenging times, during the transition from the medieval to the Modern world in the 16th century. His medical texts, for example, reflect medieval medical practice. He was not just a local Austin friar from Merton. His range of topics and his very many years as a translator make him an important figure in the early 16th century and a forerunner the next generation of translators in the Elizabethan period.

To read transcriptions and scans of the Pandectes, go to: 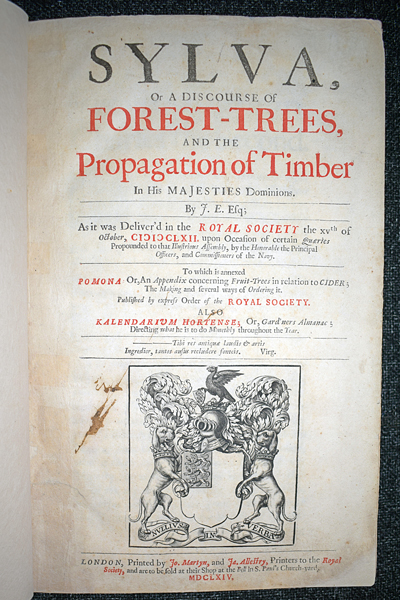 Sylva, or a Discourse on Forest-Trees and the Propagation of Timber by John Evelyn 1664

This important text book, still widely used today in the study of arboriculture, is available to read online: http://www.gutenberg.org/files/20778/20778-h/20778-h.htm

The name of the John Evelyn Club was chosen by Richardson Evans and the early founders of the Wimbledon Society because of John Evelyn’s love of nature, and art and his pleasant character.  Sylva was first presented as a paper to the Royal Society in 1662. John Evelyn, a horticultural pioneer and early Fellow of the Royal Society, published the work as a book in 1664. The Museum’s copy was given by Richardson Evans in 1918.

It is a popular, and nationally important, book which encouraged the planting of fruit and forest trees following the devastation of the English Civil War, and also inspired informal landscape planting. A new, much illustrated edition was published in 2014 to celebrate its 350th anniversary.

The Game of Sphairistike by Walter Wingfield 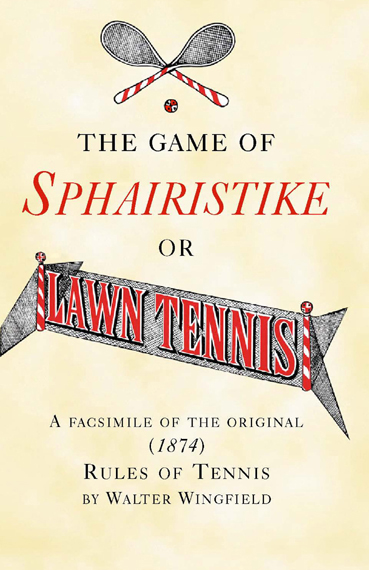 Facsimile of The Game of Sphairistike or Lawn Tennis (The Rules of Tennis) by Walter Wingfield, 2nd edition 1874

In this important book Walter Wingfield defined his newly patented game of lawn tennis and its rules, or rather popularised the sport, as various others had previously combined sports like court tennis and rackets to play a game similar to that which he called Sphairistike. The name is derived from an ancient Greek adjective meaning ‘playing ball games’. The Museum of Wimbledon’s copy is on loan the All England Lawn Tennis Club Museum in Church Road, Wimbledon, where you can see it on display. Facsimile copies are sold in our Museum shop.

Hints On the Formation of Local Museums by Joseph Toynbee 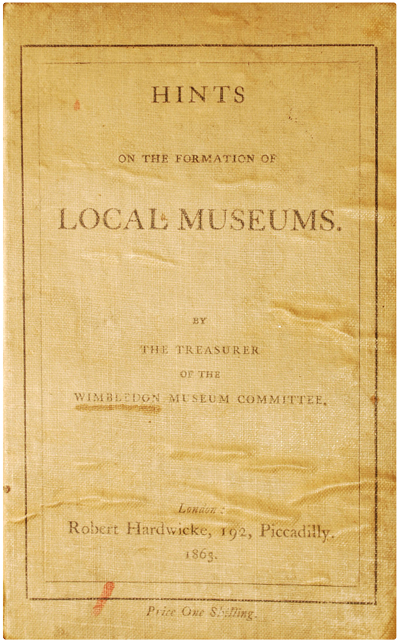 Hints On the Formation of Local Museums by Joseph Toynbee, 1863

Perhaps the book we are particularly fond of is Joseph Toynbee’s guide to founding and running a local museum. Our Museum reflects so much of what was set up in the early 1900s.

His account printed in a handy pocket-sized volume crammed full of sensible advice also gives us the names of those working with him, such as Sir Norman Lockyer, the scientist and astronomer.  We have two copies, both well-used, and you can read and download it online here.