The Manuscripts and Archives Collection is a fascinating and varied collection of original documents and records. Most concern Wimbledon and Wimbledonians of all walks of life, though there are some items covering a wider area, especially Merton.

This collection gives Insights into the ups and downs of local lives and organizations, such as the poignant Harry Channon Collection relating to a soldier killed in France in 1915 aged 18 – his love letter, photographs and pressed flowers that once belonged to his teenage sweetheart, or the many documents from a hairdressers operating in Wimbledon High Street during the early 20th century.

The earliest manuscripts date back to the medieval period, one a grant of tithes to the Prior of Merton in 1354 and the other a conveyance of lands, including some in Wimbledon, by the Bishop of Exeter in 1414 to William Gascoigne and John Dyneley.

There are also deeds relating to local properties or records such as the game book of Cannizaro House 1934-46, giving details of shot gamebirds, which has drawings on the blank pages at the back made by the donor when she was a small child.

The Merton Place deeds include the signatures and seals of Horatio Nelson and Emma Hamilton and a number of people involved with lending her money. They shed light on Nelson’s purchase of the estate and its eventual disposal following Emma Hamilton’s bankruptcy. While the original copies are on loan in the Surrey History Centre, and can be consulted there, the Museum has facsimile copies available.

Our Archive Collections chart the story and activities of the Wimbledon Society (formerly the John Evelyn Club and the John Evelyn Society) and the Museum, as well as of countless other local organizations, societies, clubs, hospitals, businesses, shops and local families, Among them are the Wimbledon Village Club, military and relief organizations during the First and Second World Wars, local Suffragists and Suffragettes and Parish and Vestry records.

We have, amongst others, many records of the Richardson Evans and Rathbone families, the campaign to save Wimbledon Common & Putney Heath for the public, the Minutes of the Merton Park Estate involving John and Ernest Innes and F.G. Courthope, the diaries of the Victorian engineer Henry Forde and notebooks belonging to a local ARP Warden based in the Cottenham Park area.

The Minute Book relating to the Wimbledon Branch of the London Society for Women’s Suffrage 1911-1916, given in 1958 by Edith Webster  the last Hon. Secretary, following her donation of documents in 1918, compliment other records and objects relating to the campaign to give women the vote in Wimbledon and Merton 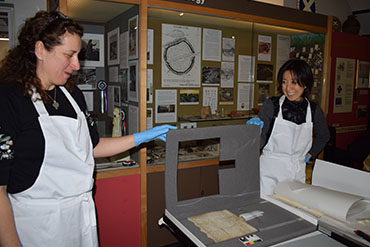 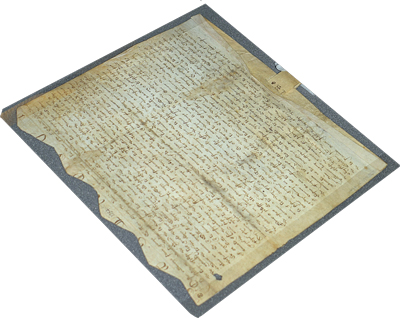 Grant of the Tithes of Manteby to the Prior of Merton 1354, receiving preventive conservation and a new box in conservation-grade materials, 29 January 2019. 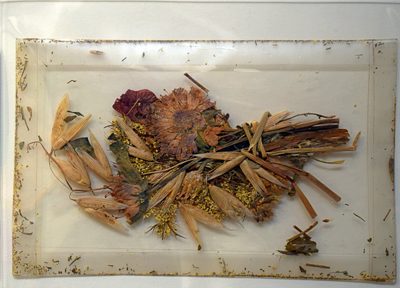 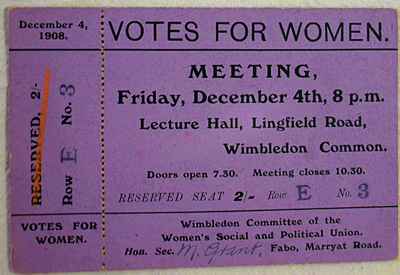 The meeting was being held in the Lecture Hall part of the Wimbledon Village Club. 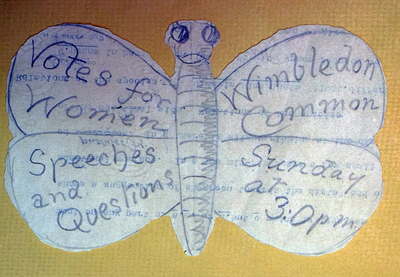 The handwriting on this design, and that on the Suffragette publicity butterfly, matches that on a painting in the Art Collection with the initials ‘H.N. B’. In addition ‘H.B.’ is written on a First World War poster for the Museum created by her and donated by her mother after her death. We think that all these items were created by Hilda Bather a talented designer and craftswoman, a Suffragette, and daughter of Dr Francis Bather.

The butterfly was cut out from the draft of a paper on fossil sea urchins which were Dr Bather’s specialism. The pencil handwriting is the same as ‘H. N. B’ ‘s on an artwork.