The Museum has a varied collection of maps and plans. There are approximately 600 items in the collection, predominantly of the Borough, in its various incarnations, and the county of Surrey. They range in date from the early 17th century to the 21st century. The collection contains original printed items, copies, facsimiles and manuscripts.

The majority of the collection has been acquired by donations. Thus, it is not a comprehensive collection. Amongst the material held is:

We do not have complete cover of the Borough and in most cases only one edition is held.  A more comprehensive collection of Ordnance Survey maps is available online at the National Library of Scotland: https://maps.nls.uk/ and is free and convenient to access and browse.

Some interesting items in our Map collection include a recent copy of a map of south-west London produced by military in the Soviet Union in 1985, ВОЕННО-ТОПОГРАФИЧЕСКО УПРАВЛЕНИЕ ГЕНЕРАЛБНОГО ШТАБА СОВЕТСКОЙ АРМИИ (Military Topographic Directorate of the General Staff of The Soviet Army).  It was part of a 4-map set covering London. These maps were classified SECRET (СЕКРЕТНО).

Another fascinating item is a map annotated to show the proposal to impose a speed limit of 10 mph along the High Street, Wimbledon Hill Road, The Broadway and part of Merton Road from November 1909.

Thomas Milne’s Land Use Map Of London And Environs (1800) plays an important part in the history of British cartography. It was the first printed map to make full use of General Roy’s trigomentrical survey. Our copy is a facsimile from 1975/6. 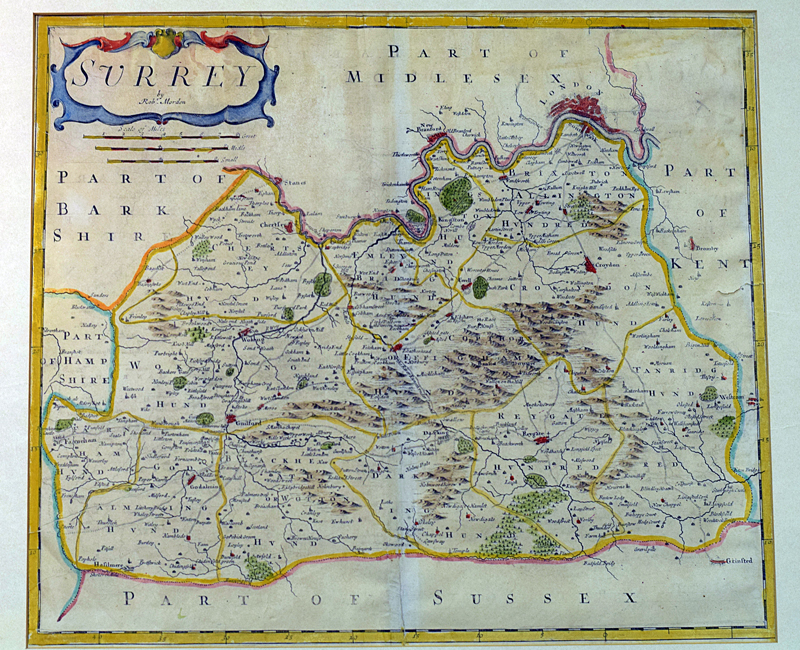 Our copy of Morden’s map clearly shows that it was originally extracted from a book a long time ago.  It is showing its age and was cleaned and given some very necessary support and repairs in 2020 by our Paper Conservator.

Robert Morden (c. 1650 – 1703) was an English bookseller, publisher, and maker of maps and globes. He was among the first successful commercial map makers.

Between about 1675 and his death in 1703, he was based under the Sign of the Atlas at premises in Cornhill and New Cheapside, London. His cartographical output was large and varied. His best-known maps are those of South Wales, North Wales and the English Counties first published in a new edition of Camden’s Britannia in 1695, and subsequently reissued in 1722, 1753 and 1772. These maps were based on new information from gentlemen of each county, and were newly engraved. Each had a decorated cartouche, and showed numerous place names. Morden also produced in 1701 a series of smaller county maps often known as ‘Miniature Mordens’