The Museum’s Photograph Collection began with the photographs taken as part of the Photographic Survey of Wimbledon organised by the Wimbledon Society (then called the John Evelyn Club) from 1905. In the late 19th  and early 20th century hundreds of amateur photographers all over England took part in the Survey movement. The idea was to record material remains of the English past before they disappeared forever. The ethos of the Survey movement, as expressed by one of its founders, Sir Benjamin Stone, called on photographers to “throw overboard all cherished notions of composition and be content to proceed in an unblushingly realistic and matter of fact way”. In spite of this stern injunction, many of the pictures made as contributions to our Survey are very pleasing to look at, as well as being a matchless documentary source for the history of Wimbledon.

Through the 20th century, and into the 21st , the Museum has continued to collect photographs which record the built environment of Wimbledon, as well as its natural beauties. We also have portrait photographs of its inhabitants: famous and obscure, alone and in groups, at work and at play. And we have photographic records of many significant local events of the twentieth century.

Two of the earliest photographs in the Collections are: 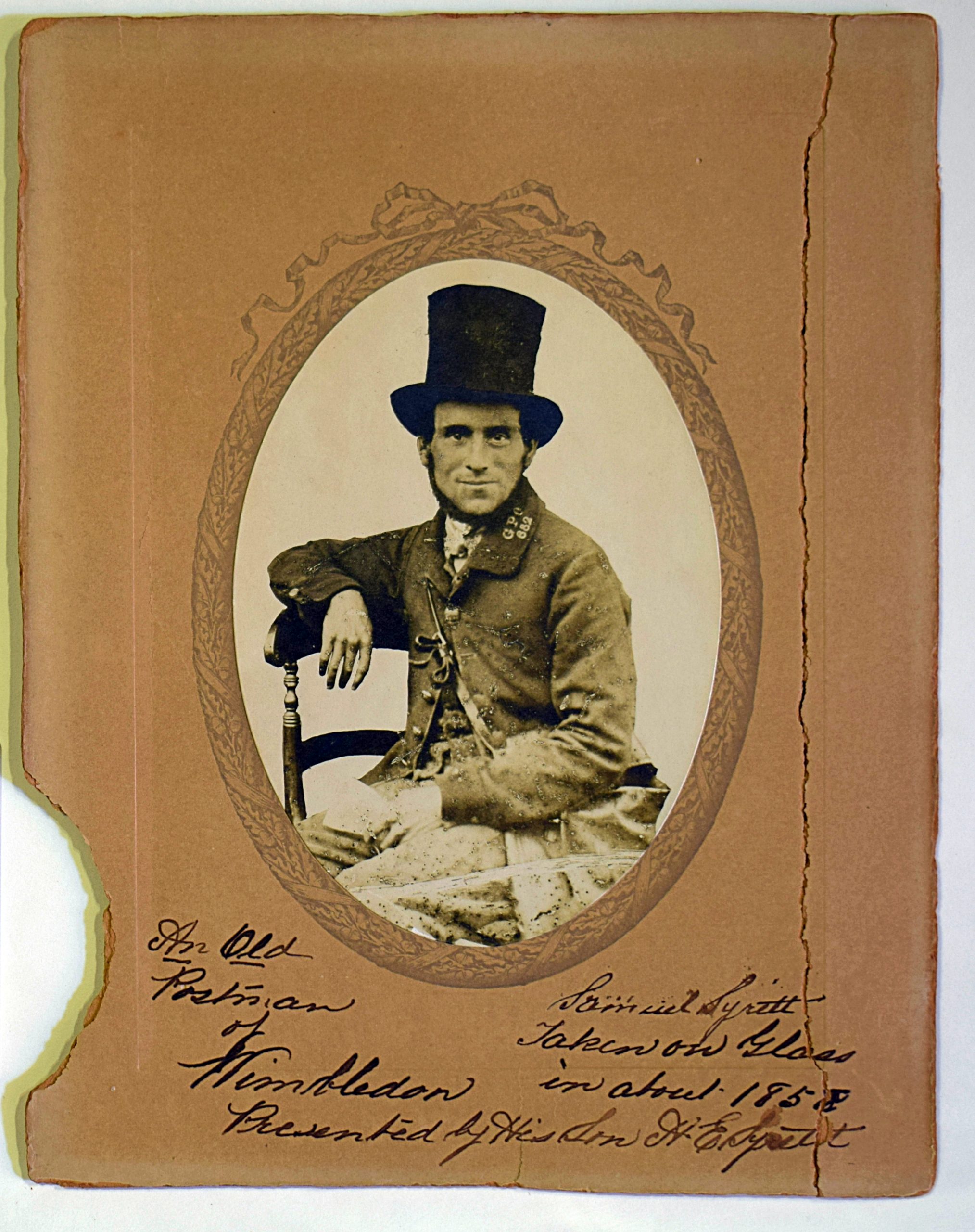 He lived for a long time at 6 Walnut Tree Row (now Walnut Tree Cottages), Church Street, Wimbledon. His burial was recorded by Emanuel Church, Wimbledon. The photograph was given to the Museum in 1922 by his son.

Recently we have been researching the lives of some of the photographers who contributed pictures to the Survey. Many of them were involved with the Museum in its early days. For instance: 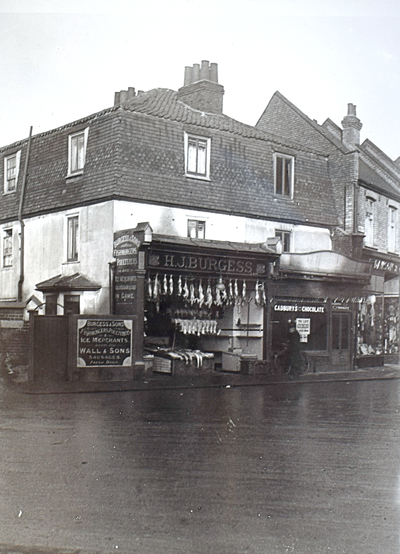 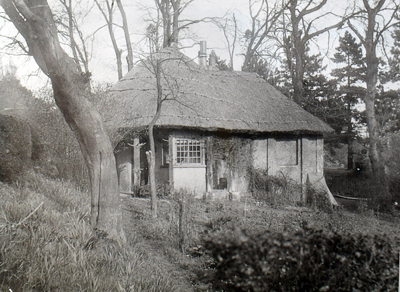 A managing director and manager of a distillery in Wimbledon, George Druce is better known for his academic work and photography. He was an authority on medieval churches, their art and archaeology, and on bestiaries. He had worldwide contacts and was a member of several major archaeological societies.  His obituary recalls that ‘he toured widely on his bicycle with a camera’.

He was the person who built the displays when the Museum first opened.  Accompanied by Henry Archer he gained permission from the War Office to photograph the First World War military camp on Wimbledon Common. George Druce supported his wife and daughter in their activities as suffragists. Born in Clapham, he lived in Wimbledon until 1923 at ‘Ravenscarr’, 22 The Downs, and then spent the rest of his life in Kent. 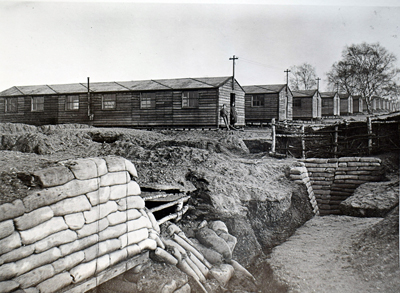 Military Camp on the Common WW1

H.C. Archer, born in Southwark, was the managing director of a tobacco company. He was instrumental with Jarvis Kenrick in preparing the extra illustrated copies of Bartlett’s History of Wimbledon in 1926-27. He contributed to the Photographic Survey of Wimbledon for the John Evelyn Club. From about 1912 he lived at Cerris Lodge, 37 Lingfield Road and then at 95 Church Road until his death.

Jarvis Kenrick, born in Chichester and moving later to Surrey, was a keen sportsman excelling in football and cricket at school. He trained as a solicitor and when he retired the family moved to ‘Holm Oak’, 16 Highbury Road, Wimbledon in around 1917, living there until at least 1925.

On November 11th, 1871, he scored the first FA Cup goal in a game of Clapham Rovers vs Upton Park. From 1877 –1879, Jarvis was on the FA committee, and scored in two FA Cup Finals in 1877 and 1878. He remained keen on sport and also became a golfer, by 1891 was the captain of the Guildford Golf Club, and in 1903 became the secretary of the Wimbledon Croquet Club. His overview of the history of croquet appeared in C.D. Locock’s Modern Croquet Tactics appeared in 1907.

Jarvis Kenrick was also a very active photographer. From at least 1908, he was a member of the Surrey Archaeological Society. In 1910, he was the secretary of the Bletchingley and Nutfield Camera Club. Sir Thomas Graham Jackson thanks Kenrick for access to prints and drawings of St Mary’s Church, Wimbledon, in his article on the same published in Surrey Archaeological Collections (1911). He also provided Uvedale Lambert with photographs for his Bletchingley: A Parish History (1911). In 1915 and 1920, he was the Secretary of the Photographic Survey and Record of Surrey, at which point he then owned 7,000 prints and 1,500 lantern slides. In 1916, The Camera as a Historian published details of a copying stand designed by Jarvis Kenrick (pp.198 – 202).

A pioneering woman geologist and scientific photographer, whose archive is with the Carrick Archive at Keyworth, Nottingham

Mary Johnston was Honorary Treasurer of the John Evelyn Society (Wimbledon Society) and on the first Museum Committee 1913-1918. Among her donations to the Museum are fossils, flint implements and photographs, for example, of St Mary’s Church.

A famous palaeontologist and photographer who, in May 1919, became one of the first 12 women to be elected as Fellows of the Geological Society, previously only open to men.  Mary Johnston is significant in the development of the science of geology as well as research photography at a time when photography was still in its infancy. She was a very active member of the Geologists’ Association, which admitted women members from its beginnings in 1858. In the course of her research she travelled around the world.

Her family moved to ‘Hazelwood’ on Wimbledon Hill from Kent after her father died. Though she studied geology at the University of London she never gained a degree. Her interests included rowing, heraldry and church history.