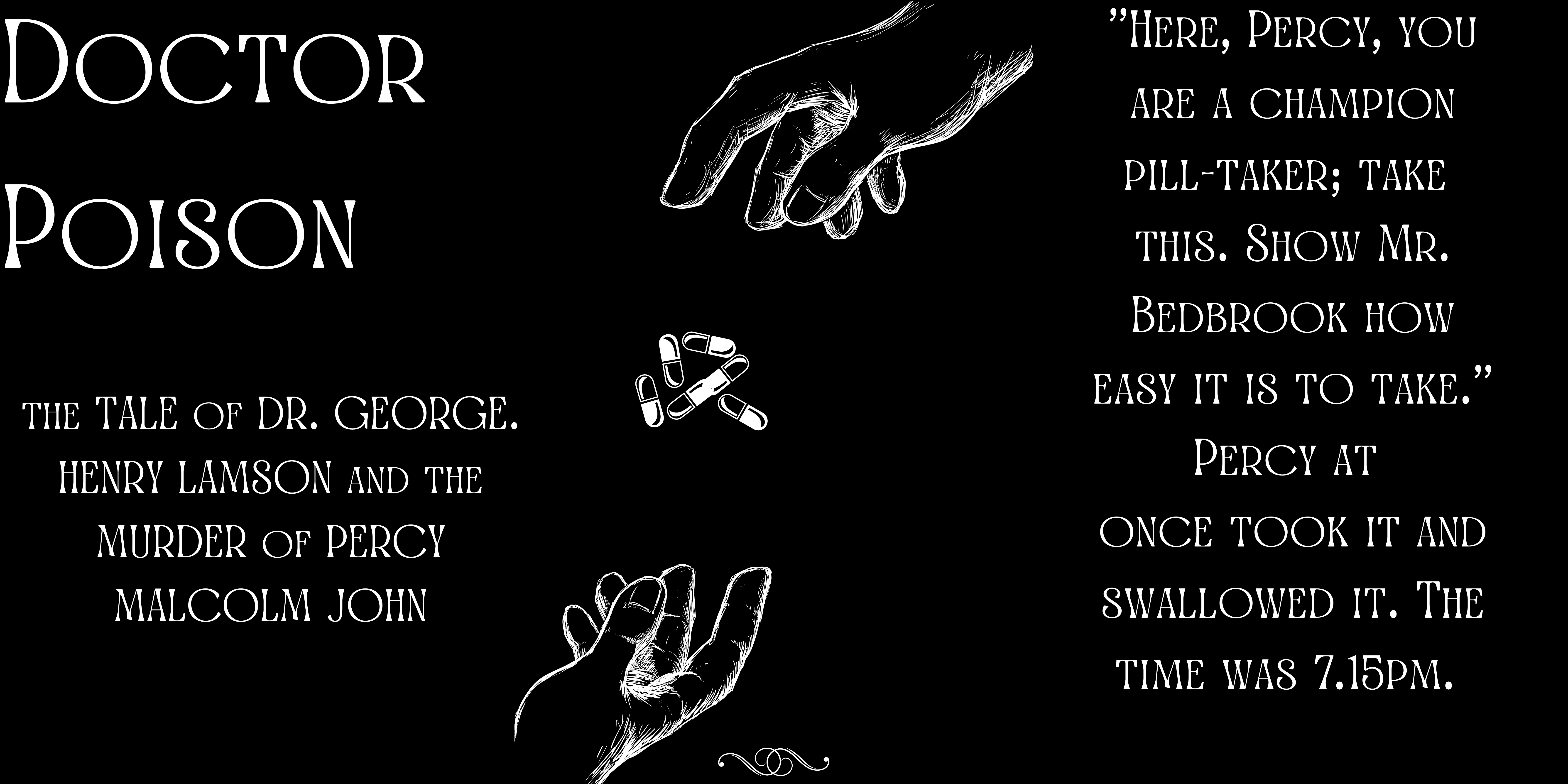 George Henry Lamson was born on the 8th of September 1852 to Julia Wood Schuyler and Reverend William Orne Lamson. He was born in the U.S.A into a prominent family.
During the Franco-Prussian war, 19 year old Lamson fought with the French Ambulance Corps during the 1871 siege of Paris. He received a Legion of Honour for his service. Prior to this he had also volunteered as a surgeon in both Romania and Serbia earning multiple decorations.

On his return to England he married his wife, Kate George Lamson (née John). She had four other siblings, one sister and three brothers. One brother had passed away already as had both of her parents.
As this was before the ‘Married Woman’s Property Act’, His wife’s portion of the inheritance from her parents’ death essentially passed straight into the hands of Lamson upon their marriage.

Lamson  used her money to set up his own medical practice in Bournemouth. However, he was soon running out of money. During his years in service, like many soldiers, he had acquired a morphine addiction which was financially crippling him. His cheques bounced, the banks refused further credit and his creditors were pushing for repayment.

When Lamson’s wife suddenly lost another sibling, her brother Herbert John, in 1879. As a joint inheritor of the family’s estate the money was divided amongst the remaining siblings, with a portion being assumed by Dr and Mrs Lamson. Her remaining siblings were her married sister, Mrs Chapman, and her youngest brother, Percy Malcolm John. Despite the cash injection, soon after, once again Dr Lamson’s habits were fed leading his family into finacial chaos.

Percy John, now the only surviving male of the five John children, was hemiplegic. He was born with a curvature of the spine which caused paralysis of his lower limbs. In the trial text his teachers discuss how despite this he was of a ‘cheerful disposition’ although occasionally suffering from bouts of depression at being unable to join his peers in physical activities. He attended and boarded at Blenheim House School in Wimbledon on St George’s Road, founded in 1872. (After the murder the school was renamed St George’s College but moved to Worcester Road. Later, in 1897, the building became a boarding house for King’s College School but was closed a few years later.)

On December 3rd 1881, Dr Lamson visited Percy at his school under the pretence that he was stopping by before taking a trip to Florence to visit his father. In reality, Lamson had actually come to London in order to pawn his possessions and borrow money to repay his ever growing debts.

Lamson took tea with Percy and his teacher Mr Bedbrook. Lamson brought with him a Dundee cake. After they all had eaten the cake, he pulled from his bag a box of capsules. Turning to Percy’s teacher and he said,

“While in America I did not forget you. I have brought these capsules for you. You will find them very useful to give the boys medicine.” Handing an empty capsule to Mr Bedbrook to examine, Dr Lamson took another, opened it and spooned in some sugar. He then closed the capsule and passed it to Percy saying, “Here Percy, you are a champion pill-taker; take this. Show Mr. Bedbrook how easy it is to take.”

Percy swallowed the pill without hesitation. It was 7:15pm.

After this Mr Bedbrook noticed that Lamson was anxious to leave, despite being within a minute’s walk of the station. At the door he mentioned to Mr Bedbrook that he did not think Percy had much time left. An odd remark considering that except for his limited mobility, Percy was in generally good health.

Some minutes after Lamson’s departure Percy found himself complaining of heartburn. He claimed he felt the “same as I did after my brother-in-law gave me a pill at Shanklin” (the residence of his other sister).

Percy became more ill and was carried to his bedroom vomiting. He was in fits of agony and had to be forcibly held down. His anguish lasted for hours. The trial texts said he felt his “throat was closing up” and his skin was being “drawn up”.
Dr Little and Dr Berry, two guest doctors, realising that there was nothing that could save Percy, attempted to ease his pain with morphine. In the extended trial records, the effects of the poison are detailed as “exceedingly rapid, it paralyses the sensory nerves, reduces the pulse to around 40 bpm, dilates and contracts the pupils before it kills. It paralyses the respiratory muscles as well as the motor nerves.” Finally, after slipping into a comatose state, at 11pm Percy died. The signs of poisoning were clear, Percy’s bodily expulsions were kept for examination. Suspicions lay exclusively at the feet of Dr Lamson.

Lamson was tried in March 1882 at The Old Bailey for murder. He was found guilty. He had poisoned Percy in both his portion of cake and with the capsule that contained aconitine. The poison was chosen as during Lamson’s medical studies he was told by his then Professor that it was undetectable. Advances in forensic science, however, had since been made allowing the poison to be clearly identified. Along with this, evidence was provided of his purchasing the poison from a London chemist (Allen and Hanbury, Lombard Street).

There was an initial attempt to delay sentencing when the prisoner’s family tried to claim insanity. This appeal did not succeed. 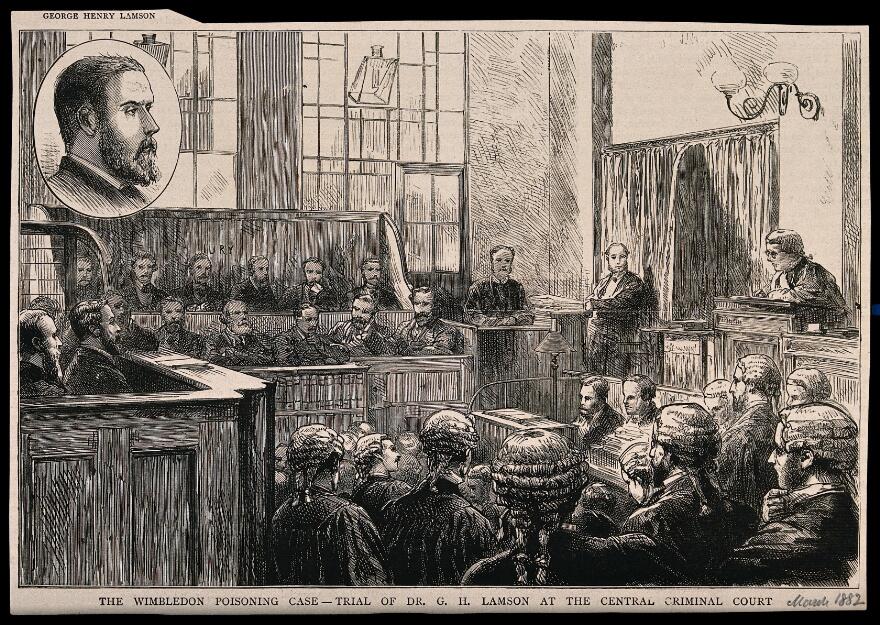