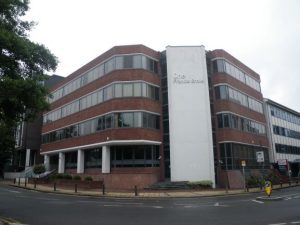 An application has been made for the demolition and redevelopment of 1-4 Francis Grove. This is the site at the corner of Francis Grove and St George’s Road occupied at present by a four-storey office block. We sent detailed objections covering the following issues to Merton planners.

At a proposed ten storeys (44 metres) high, we considered that the height was grossly excessive, being twice as high as the CIPD building in the Broadway. Furthermore, while the current building is set back from the site boundary at the rear, the proposed replacement would be built right up to the property line for its full height. This would have a detrimental effect on daylight reaching adjoining buildings.

The proposal involves the demolition of a modern building which we considered to be a waste of resources now that both Government and the Council have declared a Climate Emergency. The building does not meet the London Plan desire for all new development to be zero carbon and it appears that the principal energy generation component comes from a mere 19 PV panels, fewer than might be found on an ordinary house.

Our letter of objection also queried whether new offices are needed in our town centre. Unfortunately, the Council’s Planning Committee decided to approve the application. This has now been called in by the Mayor of London, who has oversight of large developments, and a final decision from the Mayor’s office is still awaited.