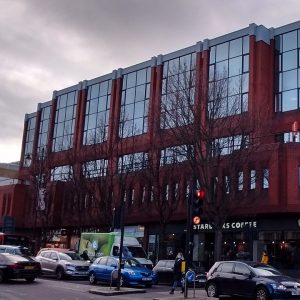 St George’s House East, the office block at the corner of Wimbledon Hill Road and St George’s Road, was only built in the 1980s.  Many readers may remember the site beforehand, with a patch of open ground at the junction and the South Western pub, originally the Station Master’s house, opposite the station.

The owners of the site have now announced plans to demolish the building and replace it with a 12-storey (53 metres)office building with retail on the ground floor of the Hill Road frontage.  The top five stories would be set back.  Recognising changing travel-to-work patterns, the developers have planned for a large cycle store.

There would also be a new footpath connecting St George’s Road to the railway path which will be widened.  We would have liked to see the removal of the steep steps on the railway path to make it accessible to wheelchair and pram users and cyclists but the steps are outside the boundary of the development.

Why demolish such a relatively new building?  The developers claim that the existing building is “tired” and does not meet current office standards. Why not refurbish and ‘retrofit’ to make the building carbon neutral and as sustainable as possible?

We have consistently argued against high-rise buildings in the town centre and have stressed that surveys of residents have shown that people do not want them. Local people have consistently said that 6 storeys should be the maximum.  What is proposed is out of scale locally, and not in the character of Wimbledon. So why is the developer proposing to build to 12 storeys.  Their justification is that the recently-adopted Wimbledon Town Centre planning rules shows that the Council would allow up to 12 storeys on that site.  So the developer is merely doing what the Council has indicated that it will accept.  We suspect that over time this will encourage other developers to build to the Council’s limit through the town centre. The planning application will be determined by the Council’s Planning Applications Committee on 10th February 2022.

Read our letter of objection here