OUR VIEWS ON HARTFIELD WALK 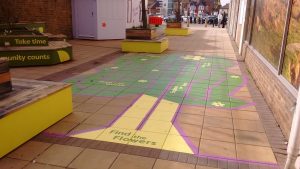 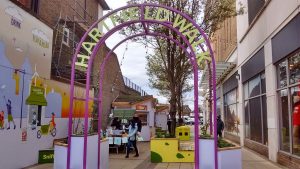 Hartfield Walk is the new name given to a small alleyway off the Broadway between Black’s & Robert Dyas.  It leads to the back entrance of Morrison’s supermarket and the Hartfield Road car park.

Love Wimbledon, which is the operating name of the town centre’s Business Improvement District (BID) and which is owned by local businesses, has sponsored improvements to Hartfield Walk which provide four fast food kiosks plus seats, planters and games for children marked out on the paving stones.

In principle we think that this is a good idea and improves the alleyway.  However, we have two main concerns.

The first is that Love Wimbledon has proceeded with the works before planning permission has been given, and even before the period allowed for comments on their planning application has expired.  This is unfortunate and not what we would have expected of them.

Our second concern is that the scheme is ill-conceived in its detail.  Customers of fast food outlets are bound to create litter, but there is only one litter bin.  The planters and seats around the existing trees may look pretty but they do not seem to have been designed to let water and air reach the tree roots, with the risk that they may die over time.  And the children’s games on the pavement, if widely used, would be an encumbrance to pedestrians and wheelchair users.

The Metropolitan Police and the Borough Tree Warden have both expressed serious concerns about the design.  You can read their submissions on the Council’s Planning website under reference 21/P0855.

We have expressed our views to the Council Planning Department (you can read our letter here).  We believe that the Council should refuse this retrospective application and encourage Love Wimbledon to submit revised plans that take into account the criticisms made by various bodies.