SHOULD CYCLISTS BE ALLOWED ON FOOTPATHS?

By david6 December 2020No Comments 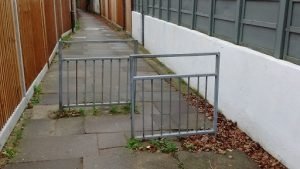 Wimbledon has quite a network of footpaths.

Some of these have “No Cycling” signs: others do not.  But even where a “No Cycling” sign exists, any barrier is unlikely to deter cyclists – it would be impossible to design a barrier that allowed wheel chairs to pass but not cyclists.  Some footpaths implicitly encourage cyclists, such as the footbridge over the main railway line between Dundonald Road and Alt Grove where a cycle ramp was recently installed.

So, should shared use by cyclists and walkers be encouraged?  We think that there is a case for this.  Since the declaration of a Climate Emergency, both cycling and walking are being encouraged.  If we wish our children to cycle to school instead of being driven then they need safe spaces away from traffic dangers and fumes.

We have suggested to Merton Council that the new Climate Action Group should review the Borough’s footpaths to make them both walker and cyclist friendly.

Cycling on pavements alongside roads is a different matter and we agree that this should remain prohibited.

A link to our letter is here.  The Council has already acknowledged our helpful suggestions