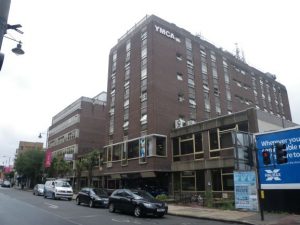 A planning application has been made for the redevelopment of the YMCA building in the Broadway, following a public exhibition of the original plans last year.

The new plans are for a 121-room YMCA hostel and 135 flats for sale, of which 108 would be one-bed, 25 would be two-bed and 1 would be a three-bed apartment. There would be a south-facing public open space beside the Broadway with trees: similar in concept to, but smaller than, the Piazza outside Morrisons. There would also be two ground-floor commercial units.

The development would comprise the ground floor plus a maximum of eight storeys above. The top floor would be partly set back and the total height would be 28 metres (this compares with the CIPD building in the Broadway which is 22 metres to the eaves).

We welcome some of the changes from the original plans, particularly making the proposed open space more accessible.

However, we consider that the overall height is too great and we have reminded the Council that public consultations have consistently rejected new buildings higher than the CIPD building’s 22 metres.

We are also unhappy that 52 of the proposed flats are single aspect.  With no natural cross ventilation this would inevitably lead to the installation of mechanical air handling, a wasteful use of energy.  We have suggested that all flats should be dual aspect.

Provision for cycle storage is welcomed, but the access needs to be more user-friendly.  It is not ideal to have to pass around the back of the service yard and other flats, then through a corridor and up a lift before getting to the cycle store.

We hope that the Council will seek improvements.